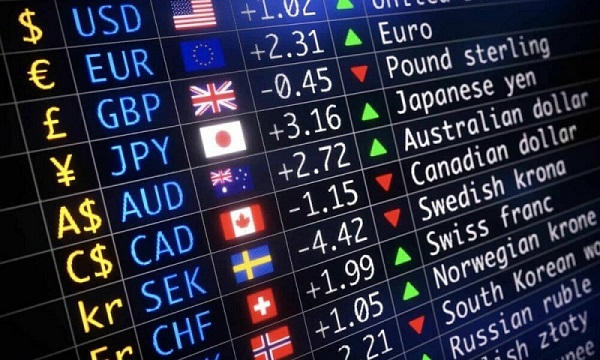 The major part of speculations is executed on Forex market.

Being a global market, Forex does not have settled place of trading and represents huge army of traders connected by communication channels. Trading is executed by means of phones and computers at the same time all over the world. Consequently trading does not stop because there are always people or organizations who want to buy or sell currency.  Being an interbank market, Forex is in the lead among all others segments of the currency exchange market by the volume of deals. Exactly conversion operations (exchange deals of some amount of monetary unit of one country for the currency of another country for the concerted exchange rate at certain date) because of its high profitability in comparison with deposit-credit operations (short-term operations of allocation and attracting missing funds in international currencies for a specified time with fixed interest) attract the most important traders. Almost all the trading instruments are traded on Forex but the most popular are USD, EUR, JPY, GBP and SHF, owing to it they are called “Major currencies”. These currencies compose major currency pairs of Forex market – EUR/USD, GBP/USD, USD/CHF, USD/JPY.

Exchange rate of one currency against another one on Forex market fixes as a result of bid and ask. Process of exchange rate fixing is called price quotations. They can be direct or reversal.

Direct quotation is a price expression of foreign currency through the national one. Most of currency exchange rates are direct quotation of US Dollar to currencies of different countries.

Reversal quotation is a price expression of nationalcurrency through foreign one. Historically English and Irish pound, Euro, Australian and New Zealand dollar and some other currency have reversal quotation.

Moreover there exists such conception as “Cross quotation”. It is exchange quotations where USD is not base currency and not currency of the pair – EUR/JPY, GBP/CHF, EUR/GBP and others.

Let us consider currency pair USD/RUR. USD is base currency and RUR is currency of a deal. Value of US Dollar is Ruble-denominated.

What is the importance of this case? The thing is that while deals with any currency pair execution, exactly base currency is being sold or bought, it is asset. That is why if you want to open EUR/USD order (pic.1), you should understand that you will buy or sell EUR. Many people think that if I sold Euro versus US Dollar it is the same that if I sold US Dollar versus Euro. In general, it is fair but it can lead to unwanted mistakes while opening or closing position.

You should remember – base currency is being sold or bought, currency which is first in currency pair.

Picture 2 shows example of rising and falling of Euro versus US Dollar. At the left side we can see that absolute value of US Dollar is increasing. It means that for 1 Euro one pays more US Dollars. At the right side it is decreasing, which means that Euro is becoming cheaper.

The major market makers, as it was said before, are commercial banks, central bank, brokerage companies, private persons, investment foundations and exchange markets, but basiс market quotations are formed on basis of demand and supply as a result of major market makers interaction (they are banks, investment foundations, etc.). Every market maker while every single deal acts as a seller or customer. Banks and financial companies trading market always give bilateral quotation, left side of quotation is called bid, and right one is ask. If you are going to sell base currency then you act as a seller and would make a deal by bid price; if you decided to buy one, then you are client and order is opened at ask price. Bid price is always less than ask price because dealer is obliged to buy base currency at bid price and sell at ask price. Difference between buying price and selling price is called Spread which is often the main dealer’s basis of income. Let us consider the examples, please pay attention that given below situation is similar to exchange office. If you are going to sell traded currency then it will be bought at bid price, and you are going to buy then deal will be executed at ask price, difference between these prices (Spread) is an income of exchange office.

Initial selling of base currency is in basis of short position, idea “sell higher, buy cheaper”. Sequence of processes of buying and selling was changed. If dealer suppose that quotation of some currency will fall, he/she sells it. When quotation falls he will buy it cheaper, deriving profit from difference between buying and selling price. Opening of short position happens by selling the currency, closing the buying.

Forex market is Interbank market, the main source of quotations of which is banks market-makers (banks which “make” market). On basis of their quotations level-sensitive pricing is occurring. These banks are interacting actively with markets not only by customers’ requests but also carry on their own strategies.